Interview with Malcolm - A South African expat living in Seoul

Malcolm is a 28-year-old South African living in Seoul, South Korea. He's traveled to 12 different countries and loves living in Korea. He is currently teaching at a kindergarten, with some afternoon classes. He has taught people from the ages of 4 to 65. 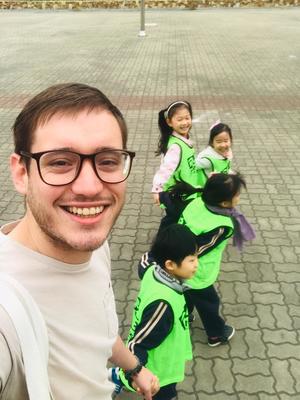 Q: Where are you currently living?
A: I live in Seoul, South Korea.

Q: When did you move here?
A: I moved to Seoul in December 2015. I didn't realise at the time that this was the middle of winter, so that was interesting.

Q: Is this your first expat experience?
A: Indeed it is.

Q: Did you move here alone or with a spouse/family?
A: No, I moved to Seoul on my own. However, my brother lived in Korea (in a different city) when I first moved here.

Q: Why did you move; what do you do?
A: I moved here because I wanted an adventure and a challenge. I teach English at a kindergarten now.

Q: What do you enjoy most about Seoul? How would you rate the quality of life compared to your home country?
A: Public transportation, food, activities, and incredible public places are a few things that Seoul offers and does exceptionally well. I'm from a small town in South Africa, so Seoul offers a bit more to do and see than what I was used to.

Q: Any negative experiences? What do you miss most about home?
A: No dramatic negatives, I believe you are in charge of how you perceive things. So, losing my ID card was a bit of a negative, but I got to take a day off to go to immigration. There's always a silver lining. I miss seafood soaked in lemon butter sauce so much though.

Q: What are the biggest adjustments you had to make when settling into expat life here? Did you experience any particular elements of culture shock?
A: Communication with your local restaurant, taxi driver, and hairdresser was a bit difficult at first, but once you get past showing them pictures and learning some basic Korean you'll be set.

Q: What’s the cost of living compared to home? Is there anything particularly expensive or particularly cheap in South Korea?
A: At first everything was expensive and I used literally all of my money, but that was because I had sights to see, drinks to drink, food to eat, and thick winter coats to buy. As you finish the bucket list of things to do, eat, drink, and wear everything becomes cheaper. You won't eat out anymore for every meal.

Q: How would you rate the public transport in Seoul? What is your most memorable experience of using your city’s transport system?
A: 10/10. There are frequent subways and buses in and around Seoul, accompanied with apps you can download that give you detailed information about the journey you want to take, or bus and subway schedules. A memorable experience was in my first month, I took a bus for an hour in a random direction, got off, ate, and realised that I was lost. I found a close subway station and had to figure out how to get back. There's no faster way to learn about the subway system until you're lost and need to go home.

Q: How would you rate the healthcare in Seoul? Have you had any particularly good/bad experiences with regards to doctors and hospitals? Are there any hospitals you would recommend?
A: The healthcare system works well. Most doctors, pharmacists, and dentists speak English, and are very helpful. Once I was diagnosed with tonsillitis, but my tonsils were removed when I was 11. But instead of arguing, I took the sick day, and rested up. I would recommend not going to that guy. I had another incident where I had an accident and had to be hospitalised. Because I had medical insurance through the school I was working for, everything from admission to surgery was pretty simple to get through. Hospitals generally have high standards here. Even though staff did not speak a lot of English, we were able to understand each other with the help of Google translate and my basic Korean skills.

Q: What are the biggest safety issues facing expats living in Seoul? Are there any areas expats should avoid?
A: I've never felt unsafe. Avoid areas where there are bar fights? I haven't seen one, but I assume they're universal.

Q: How do you rate the standard of housing in the city? What different options are available for expats?
A: This was one of the only negative points I've experienced. Though my contract included accommodation, Seoul definitely has a bit of a tiny house living situation. Apartments tend to be incredibly small. My apartment only has space for a cupboard, single bed, a small bathroom and a kitchen sink. Other cities in Korea do offer larger apartments. I would recommend asking your school to send you pictures of the apartment they offer you before you sign your contract. Korean bathrooms are also different from what I was used to. Don't expect to see a full shower in your apartment, it is more like a long shower handle that you hold and the whole bathroom becomes your shower.

Q: Any areas or suburbs you’d recommend for expats to live in?
A: Look at a map of the city, and make sure you are close to a subway station. I would recommend finding a place on the green subway line (Line 2) as it goes in a circle around the city.

Q: How tolerant are the locals of foreigners? Is there obvious discrimination against any particular groups? Have you ever experienced discrimination in your host city?
A: Very tolerant, I've felt no discrimination. People are very kind to foreigners and offer help a lot if you look lost. Once a lady gave me an umbrella because I was walking in a slight drizzle.

Q: Was meeting people and making friends easy? How did you go about meeting new people?
A: I was lucky enough to start work at a school with many foreigners and Korean teachers, and soon became friends with many of them. There are also language exchanges, sports teams, and other groups you can join to make friends, just check it out on Facebook.

Q: Have you made friends with locals or do you mix mainly with other expats? What advice would you give to new expats looking to make friends with the locals?
A: Start with your co-teacher. You'll be working together, so I recommend becoming friends. Ask where they like to go out, and if you can join. I met many Korean friends through my co-teacher.

Q: Was getting a work permit or visa a relatively easy process? Did you tackle the visa process yourself, or did you enlist the services of an immigration consultant?
A: I did it myself, and it took about a month and a half. Getting police clearance took the longest, but I wasn't in a particular hurry. Do all of it about two months in advance.

Q: What is the economic climate in the city like? Do you have any tips for expats looking to find a job? Which resources did you find most useful?
A: Find a recruiter, and tell them what type of school you want to teach at, where you would like it to be, and how much money you want to earn. And don't accept the first offer before looking at some others.

Q: How does the work culture differ from home? Do you have any tips for expats doing business in South Korea? Did you have any particularly difficult experiences adapting to local business culture?
A:  Less holidays, and longer hours, but more money? I don't really know. Work is work for me, but I do find all the challenges very rewarding. At the end of the day when my students are happy, and they understood the work we did that day, I'm happy and I can go home knowing I did something to help someone.

Q: Is there any advice you would like to offer new expat arrivals to your city or country?
A: Download Kakao Talk before you come. It's the most popular messaging app in Korea, and it'll be at least a month before you can set up a phone contract. If you can't wait a month, get a pay-as-you-go SIM card at the airport on arrival. Join your country's embassy group on Facebook, and see what events they are planning. Go to Jeju island once. Do touristy things. Don't lose your ID card four times (like I did), but do get lost in the city and find your way back. And explore. Explore your neighborhood, city, and then the country.