Interview with Steve – A South African expat who lived in Thailand

Steve is a South African who lived abroad in Thailand teaching a class of second graders for a year. He describes his expat experience of moving to a new country as one of the most challenging and rewarding experiences of his life which has forever changed the way in which he sees the world. 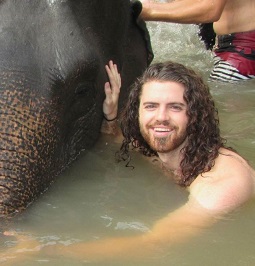 Q: Where are you currently living?
A: I have moved back home (although Thailand will always feel like my second home) to Cape Town after my travels.

Q: Is this your first expat experience?
A: I have been abroad on month-long holidays with my family before. However, yes, this was my first long-term, solo, expat experience.

Q: Did you move here alone or with a spouse/family?
A: I travelled alone.

Q: Why did you move; what do you do?
A: I needed adventure in my life. I wanted to get as far away from home as I could. I had already been to Thailand before, so I loved the cuisine and the culture (and the beaches, of course). I was a teacher.

Q: What do you enjoy most about Phayao? How would you rate the quality of life compared to your home country?
A: Phayao was definitely more rural than I was expecting. The things I enjoyed the most about my town were the lake, the gym, and Fat-Coco. The lake was enormous and exquisite. There was a little island in the centre with a Buddhist shrine that was connected to the mainland once a year with a bamboo bridge. Lit up with lanterns it looked magical! The gym I went to was this old-school, rusted-steel type gym. It was a saving grace to have somewhere to get out the excess energy and hang out with like-minded people. Fat-Coco was a chocolate Labrador that lived by my apartment building. She was so sweet, and it always made me smile to see her trotting over to greet me after a long day. The quality of life is what you make of it I found, you get what you look for and work for.

Q: Any negative experiences? What do you miss most about home?
A:  I had a number of negative experiences with rent issues, a lack of preparedness for the expectations the school had, and from the school. I had to buy art supplies, stationery etc. as the ‘all-inclusive-package’ never arrived. But I choose to look at how they taught me about myself, and how I’d react to challenges. I missed my dogs, family, and friends most of all. My experience taught me that spending time with people you care about is the truest expression of the human experience.

Q: What are the biggest adjustments you had to make when settling into expat life here? Did you experience any particular elements of culture shock?
A: The biggest adjustment I had to make was to be able to be alone, a lot. When solo travelling, especially to a town where there are only about eight people who can even speak your language, I was alone a lot. It’s hard to pick one aspect of culture shock to focus on. The things that can be exciting are often things that can surprise and astound you!

Q: What’s the cost of living compared to home? Is there anything particularly expensive or particularly cheap in Thailand?
A: The cost of living was dirt cheap. I happened to be earning a fair amount as I was at the top school in the province. However, there were still some things that caught me by surprise. Eating Western food in Thailand is way more expensive in comparison to eating Thai food in South Africa. Electricity was definitely expensive. I had to ‘treat myself’ to some cool air in my apartment for a few hours on Friday nights, otherwise, the electricity price would have more than doubled my rent.

Q: How would you rate the public transport in Thailand? What is your most memorable experience of using your city’s transport system?
A: Public transport was generally great! It was cheap and effective. I disliked how people tried to scam us ‘tourists’ in some of the major cities. I often felt unsafe when people would literally pick up your bags and start loading them into their cars/ tuk-tuks before you’ve even negotiated a price. My most memorable experiences included going around mountainous roads in a taxi, with the driver taking corners at breakneck speeds; being woken up at midnight on an overnight bus for a buffet ‘dinner’ in the middle of nowhere; hanging off the back of Songthaews with my friends on the way to some adventure or another, and exploring the back-streets of Chiang Mai in a Tuk-Tuk with my mom and gran.

Q: How would you rate the healthcare in Thailand? Have you had any particularly good/bad experiences with regards to doctors and hospitals? Are there any hospitals you would recommend?
A: I was lucky enough to not get sick or hurt while I was in Thailand. A friend of mine was hit by a car one evening (she’s alright, but had a badly broken leg and needed a few stitches). The healthcare in the hospital she was at was incredible, simply world-class. The doctors were friendly and could speak perfect English, the surgical techniques were amazing, and didn’t cost an arm, or in her case, a leg.

Q: What are the biggest safety issues facing expats living in Thailand? Are there any areas expats should avoid?
A: I generally felt a lot safer walking around in Thailand than I do in South Africa at times. Whether that is expat blindness, or whether it really was safer is still to be determined. Phayao was generally really safe as it was a fairly small town. However, the roads were still as chaotic as a bigger city, so take precaution if hiring a scooter. Another safety issue I’d say, is stick to fresh food. Don’t eat from a place where the same piece of chicken is hanging in the window from dawn ‘til dusk and you should be fine. I knew about six friends that got food poisoning on separate occasions from eating from street-food vendors that they swore were fine. Just use your discretion. Being vegan didn’t stop me from getting food poisoning either, but it definitely still helps.

Q: How do you rate the standard of housing in the city? What different options are available for expats?
A:  There are a number of affordable houses, ranging from apartments to townhouses to little cottages that many of my friends opted for. The standard of housing does vary, and it is sometimes difficult in smaller towns to find suitable landlords that are willing to rent on a short-term basis to expats. But that was just my experience. Each town is different.

Q: How tolerant are the locals of foreigners? Is there obvious discrimination against any particular groups? Have you ever experienced discrimination in Phayao?
A: Locals were largely tolerant of foreigners. I would sometimes get stares and looks of frustration when struggling to communicate. I found that learning even the smallest amount of Thai had an enormous impact on the way you are viewed by local people. I found Thai people on the whole to be generous, caring and lovely people.

Q: Was meeting people and making friends easy? How did you go about meeting new people?
A: Meeting new people was easy, but making friends is never straightforward. Some of the best friends I made, I only saw for a few months or weeks at a time, and sometimes I’d seemingly meet the same people over and over again, people I would have usually avoided back home. I met a lot of friends through the expat teaching TEFL program I was on. It's a great entry point into expat life for people looking for both short-term and longer-term options. Sometimes making friends just happened on its own, so don’t overthink it.

Q: Have you made friends with locals or do you mix mainly with other expats? What advice would you give to new expats looking to make friends with the locals?
A: I made a lot more friends with local people in Hua Hin than Phayao. Bigger cities where people know some English tend to allow for easier integration, but you get what you give, so if you learn more Thai, people will learn more English.

Q: Was getting a work permit or visa a relatively easy process? Did you tackle the visa process yourself, or did you enlist the services of an immigration consultant?
A: The visa application process was alright. My company helped me out a lot with that, but I had to do some renewals myself. Getting the paperwork and documents together was the most difficult part for me.

Q: What is the economic climate in the Phayao like? Do you have any tips for expats looking to find a job? Which resources did you find most useful?
A: The job thing was easy as I had a placement agency to help me. The job market for anything other than teaching English in my town was limited for expats though.

Q: How does the work culture differ from home? Do you have any tips for expats doing business in Thailand? Did you have any particularly difficult experiences adapting to local business culture?
A: I found the business environment to be rather similar in Thailand as in South Africa. Things are late and disorganised, there’s miscommunication and bureaucracy, annoyances and last-minute fixes, but things still somehow work out. I’m used to inefficiencies, so patience might be required from people coming from other, less chaotic countries.

Q: Is there any advice you would like to offer new expat arrivals to your city or country?
A: Do your research beforehand. Ask questions. Be firm but flexible like bamboo, and ask yourself, ‘Would this annoyance matter in a week, a month or a year?’ This helps you keep things in perspective. Happy travels.