Interview with Christy Fisher - An American expat living in Cyprus

Christy Fisher is an American expat living in Paphos. She moved to Cyprus with her husband when he got a job as a brewer at a new microbrewery on the island. Although she enjoys the sunshine and relaxed pace of life in Paphos, Christy says it can feel very isolated at times, and she misses having her own career and access to more arts and cultural activities. 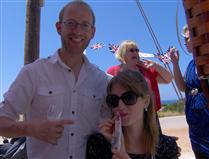 Q: How long you have you lived in Cyprus?

A:  With my husband

Q: Why did you move to Cyprus; what do you do?

A:  My husband got a job as head brewer at a new microbrewery on the island. I am not able to work legally, so I volunteer at a charity shop that benefits animals and would like to do some freelance writing for local and American publications.

Q: What do you enjoy most about Paphos, how’s the quality of life?

A:  I like the sea, the fresh air, and relaxed pace of life.

A:  I feel very isolated. Most expats are older British people, and the locals have their own thing going on. We live in a small village and there isn't much to do besides go to a bar or the beach. I miss having my own career, a large circle of friends, and access to a variety of art and culture.

About living in Paphos

Q: Which are the best places/suburbs to live in Paphos as an expat?

A: Peyia, where I live, is known for being a British expat community. I think it's a good place for Brits and holidaymakers. I would prefer to live in the capital, Nicosia, because there is more culture, more young people, and more to do.

Q: How do you rate the standard of accommodation in Paphos?

A:  We live in a fully-furnished apartment in a new resort complex. It's  clean and modern.

A:  Many things like produce and alcoholic beverages are much less expensive than in the States. Other things that the island imports such as small appliances, housewares, sunscreen, and just about anything from the pharmacy are quite expensive. Electricity is more expensive in Cyprus than anywhere else in the EU.

A:  I would love to mix more with the locals, but my observation is that they hang out at home with family, at least in the smaller villages. I rarely see Cypriot women out and about, mostly the men on chairs on the roadside or at the cafes. I mix mostly with British expats.

Q: Was it easy meeting people and making friends in Paphos?

A:  No. Most people are here on holiday or are retired British. My husband and I hang out mostly with his boss and his family.

About working in Cyprus

Q: Did you have a problem getting a work visa/permit for Cyprus?

A:  Yes. I have a resident permit, but I'm going to work on getting a work visa. I've been told by several people that it will be difficult because I am American.

Q: What’s the economic climate like in Cyprus, is there plenty of work?

A:  Jobs are few and far between. This area relies heavily on tourism, which has suffered in the recession.

Q: How does the work culture differ from home?

A:  My husband's job is MUCH more laid back and relaxed. Employers pay by the month, and the pay is horrible for the most part. Before I realized that I wasn't allowed to work legally, I was offered a job for 700 euros a month, less than what I was making a week in the States.

Q: Did a relocation company help you with your move?

Q: Did your spouse or partner have problems adjusting to their new home?

A:  He is frustrated by the lack of young people here, but he's otherwise busy with work.

Q: How would you rate the healthcare in Cyprus?

A:  Better than American healthcare. I went to a private hospital for a check-up, got right in, and paid a fraction of what I would pay in the States. The doctor was very good as well.

Q: Is there any other advice you like to offer new expat arrivals?

A: Count on everything taking about four times as long as you're used to.

> Are you an expat living in Cyprus? We'd love to hear your story. Open the questionnaire here, copy into an email and send it back to info@expatarrivals.com